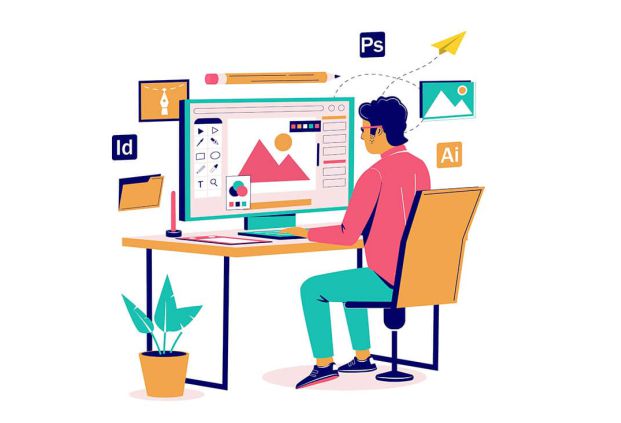 Graphic design is a creative process that involves organizing text and images on a perceptible and visible plane, two-dimensional or three-dimensional, in order to convey a message, develop an image, or visualize a thought. It can be applied digitally or non-digitally in many environments such as printing, screen, motion film, animation, interior architecture, packaging design. In graphic design and graphic arts, the basic principles of visual arts such as alignment, balance, contrast, emphasis, movement, image, proportion, proximity, repetition, rhythm, and unity apply.
Graphics is the equivalent of the German word Graphiker, and Graphic Designer is the equivalent of the English word Graphic Designer and has the same meaning. In order to have the title of graphic designer or graphic designer, it is necessary to pass education.
There are some major programs used while creating the design. At the forefront of these
- Adobe Photoshop (PS-pixel based design program),
- Adobe Illustrator (Aİ-vector-based design program)
- Corel Draw (vector-based design program) is coming.
And also,
- Adobe Indesign,
-3DS Max(3D studies),
-Adobe Flash(scripting language), ActionScript(coding language),
-Free Hand(desktop drawing program),
-Adobe Dreamweaver (web development program) is one of the leading programs used in graphic design.

Would you like to add value to your brand too? Contact us, let's create the most suitable and most beneficial solution for your business together!